The Story of Food in Photography

This entry was posted on March 7, 2019 by Gaz from Cameraworld London Branch.

Feast for the Eyes: The Story of Food in Photography

We are what we eat. Brought together by a passion for food photography, the creators of Feast for the Eyes, curator and writer Susan Bright and senior editor of Aperture Denise Wolff, are strong believers in this dictum. If their expansive exhibition, currently on view at Foam in Amsterdam—and equally wide-ranging book—is anything to go by, there is strong evidence for their case. Separated into three sections, ‘Still Life,’ ‘Around the Table’ and ‘Playing with Food,’ the exhibition brings images from the realms of art, commerce, documentary and vernacular photography into conversation with one another to reveal just how much one of the most common markers of everyday life can show us about ourselves and the world around us. 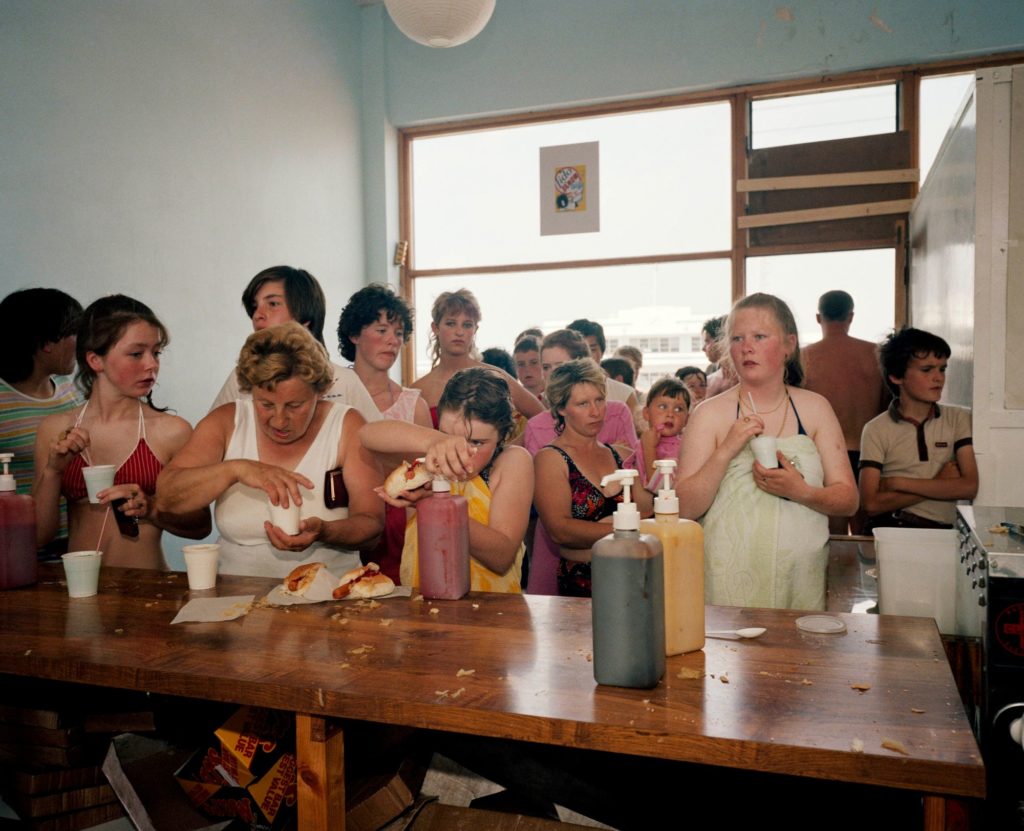 It is precisely the ordinary nature of the act of eating that makes food such a rich and fertile topic—everyone has a relationship to it. “Eating is one of the most mundane and carnal acts, yet it is also central to our rituals, religions, and celebrations. Food touches both public and private life. It can signify a lifestyle or a nation, hope or despair, hunger or excess,” affirm the curators. “Ultimately, food is not only about literal taste, but also Taste with a capital ‘T’—both the way of life we aspire to and the building blocks of culture itself. And so, similarly, photographs of food are rarely just about food.” The images on show act as portals into these many themes, and seen together, they also speak volumes about photography itself: its ontology, its languages, its various uses and our relationship to it.

The show opens with a mouth-watering collection of still life’s by an array of different artists, stretching all the way back to the medium’s early days to more recent work. Several years after the birth of photography, William Fox Talbot took the first photograph of a basket of fruit, signalling the beginning of the medium’s longstanding love affair with food. Initially, photographic still life’s borrowed from the symbolism and traditions of painting, before photographers really began to explore the particularities of their own medium. Pioneering artists such as Paul Strand and Edward Weston used fruit and vegetables to play with light and form, while Howard Edgerton’s iconic image of a bullet shooting through an apple experimented with motion, using an electronic flash he invented himself. Building on the conventions of the genre, the photographic still life forged its own exploration of time and space—one that lives on in the work of Daniel Gordon. In his dizzying, vibrant arrangements, real pieces of fruit are replaced with a mix of 2D and 3D found images of fruit, toying with perspective, texture and colour. 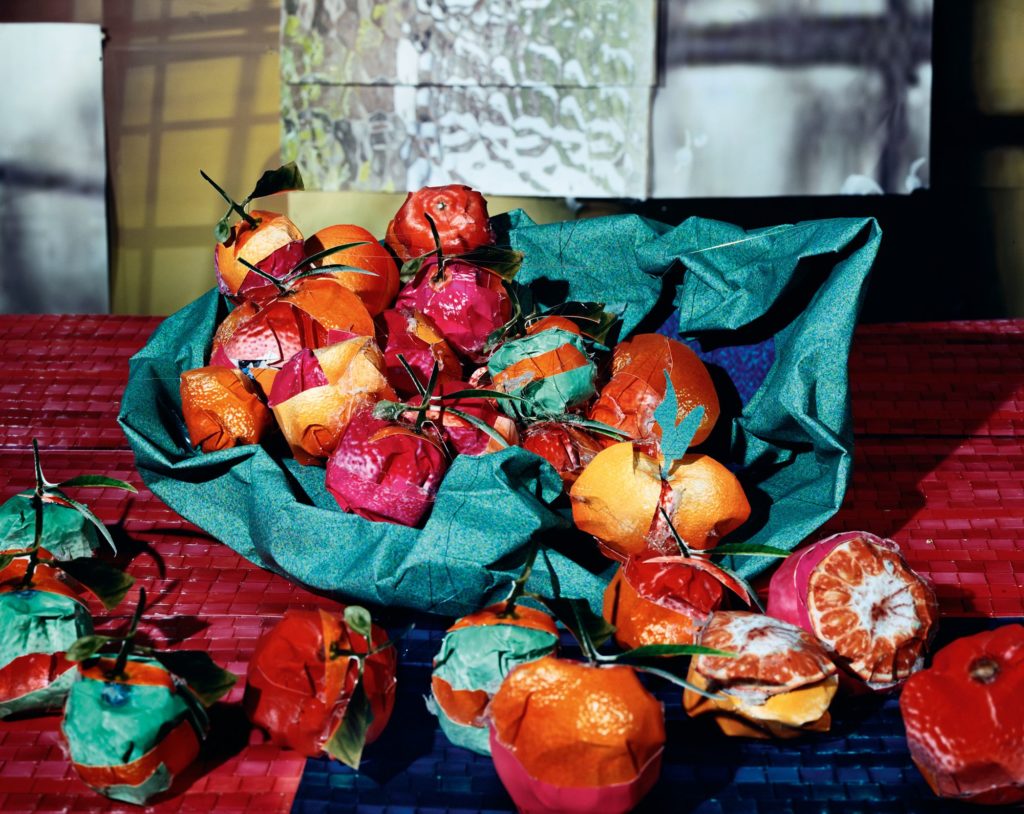 ‘Around the Table,’ the following room, focuses on food as a marker of identity—whether personal, familial, cultural or political. The dining table, in whatever shape or form it takes, is a space where notions of status, excess, scarcity, desire and social habits play out. And here, photography’s dual power to both construct and shape our values and represent a grittier reality can be viewed side by side, against the backdrop of vernacular snapshots. Nickolas Muray’s bright and inconceivably perfect commercial images depict decadent food spreads, harnessing post-WW2 aspirations and ideals, while pages from Betty Crocker’s infamous cookbooks speak to wholesome family values and the spirit of the American Dream. A very different picture of American culture can be seen in Stephen Shore’s ordinary pancakes and melon. Banal and every day, the snapshot-like photo speaks of lonesome diner meals, of a life on the move, and of popular culture. 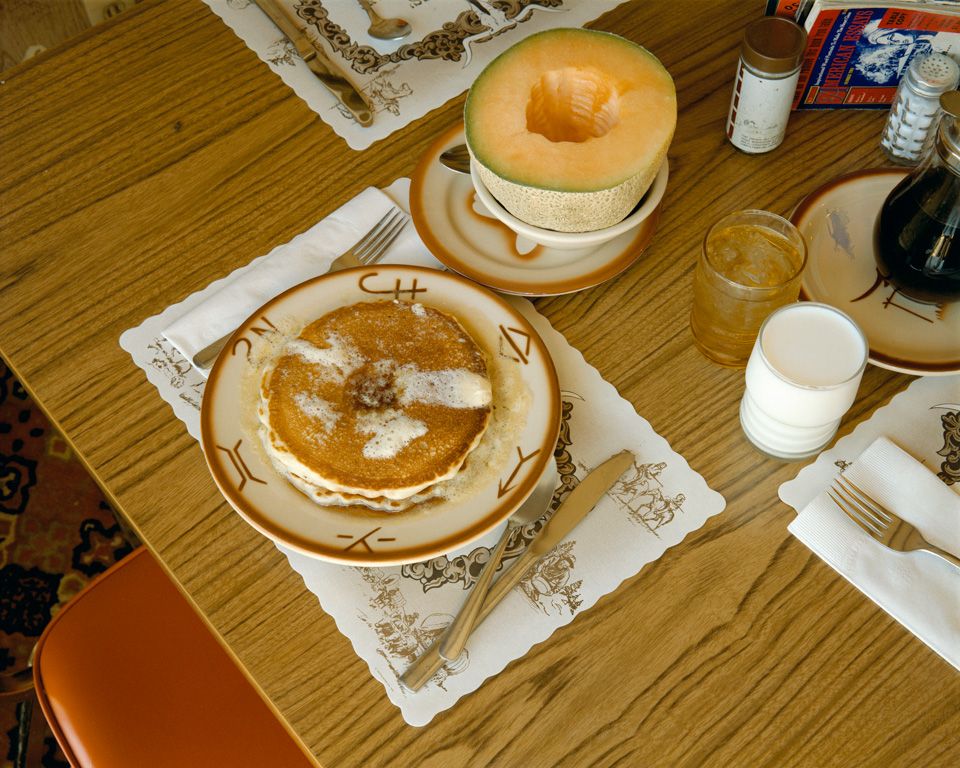 “The combination of different material and strategies enrich each other. Much of the artwork is about how we consume images, so it touches on advertising or lifestyle, or the sheer ubiquity of food images,” says Wolff. “Hank Willis Thomas explores how black men and white women have been used to sell products, including food. His works poke a hole in the conceit that has been visible in the commercial works on display.” The conversation between different photographic languages extends in the third and final section, ‘Playing with Food.’ Riot and rebellion reigns here, as the pristine commercial image is upturned and many of its messages, visual codes and aesthetics are subverted. 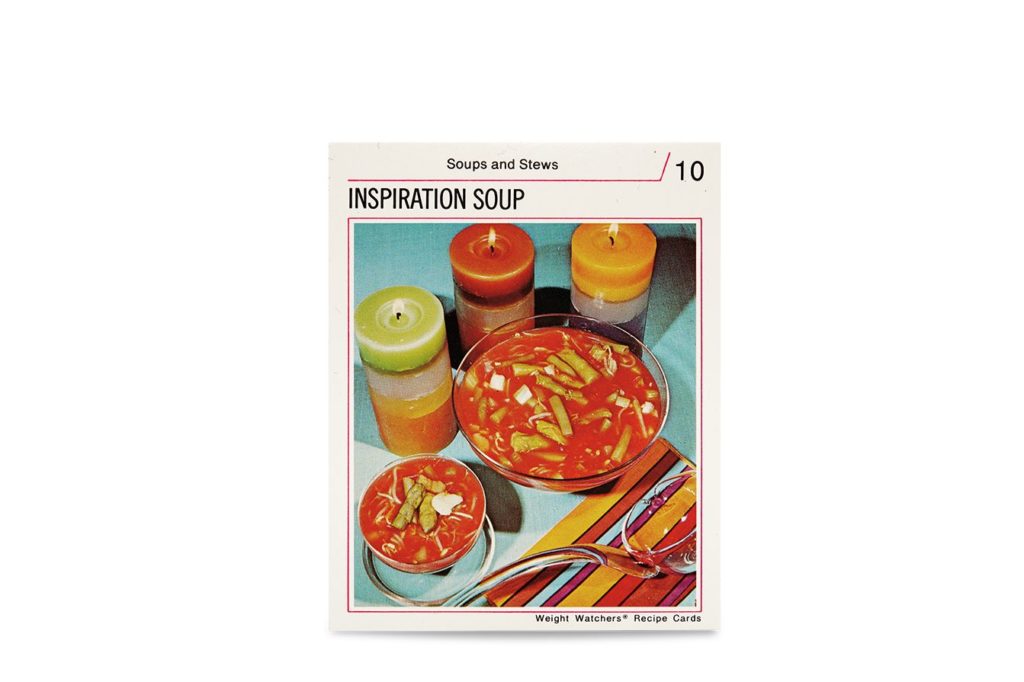 From imaginative editorial and fashion photography to milestone feminist artwork like Martha Rosler’s video-piece Semiotics of the Kitchen, food becomes a stand-in to raise questions about society and challenge values. “You can draw a straight line from the Weight Watchers cards to Cindy Sherman’s out-of-control woman—their shared connection to body image chimes more immediately,” Wolff comments. Seen in combination with the gendered cookbooks of the ’50s and ’60s, and the bizarre and elaborate food stylings of Weight Watcher’s diet recipes, the humour of the work on view, such as Sian Bonnell’s ham-adorned walls and witty take on domesticity, really pops. 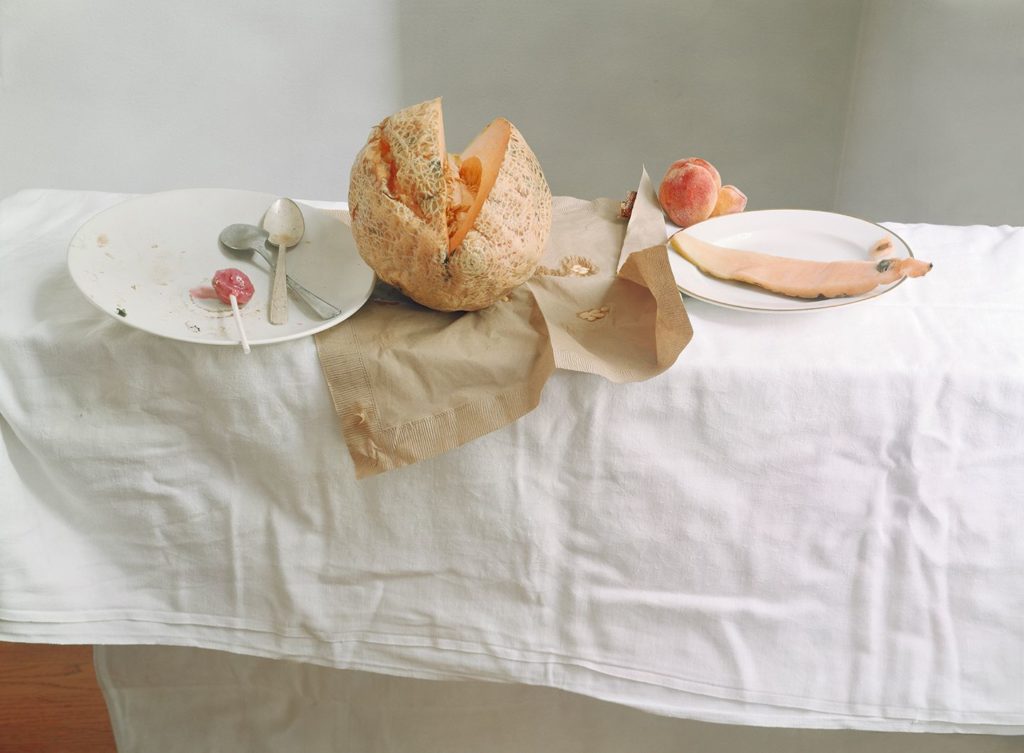 Laura Letinsky, Untitled #54, 2002, from the series "Hardly More Than Ever". © Laura Letinksy, courtesy the artist and Yancey Richard Gallery, NYC

For the show’s curators, the process of putting together Feast for the Eyes involved a journey into the numerous “rabbit holes” of photography’s history—one that started with the cookbook. It was a shared love of this humble kitchen staple that set the project in motion. Bright had previously worked on a survey show of British photography, which included a Good Housekeeping cookbook from the 1960s. Looking at the long lists of ingredients, wholly unrealistic for most households at the time, she began to think about cookbooks as social documents. “It was not just about food, but about Britain rebranding and rebuilding after the war and out of much of the austerity of the 1950s,” she says. “It was aspirational and striving, and also included recipes with an Indian flavour, which illustrated the waves of immigration that were happening, and how culture changes in terms of how we eat.” 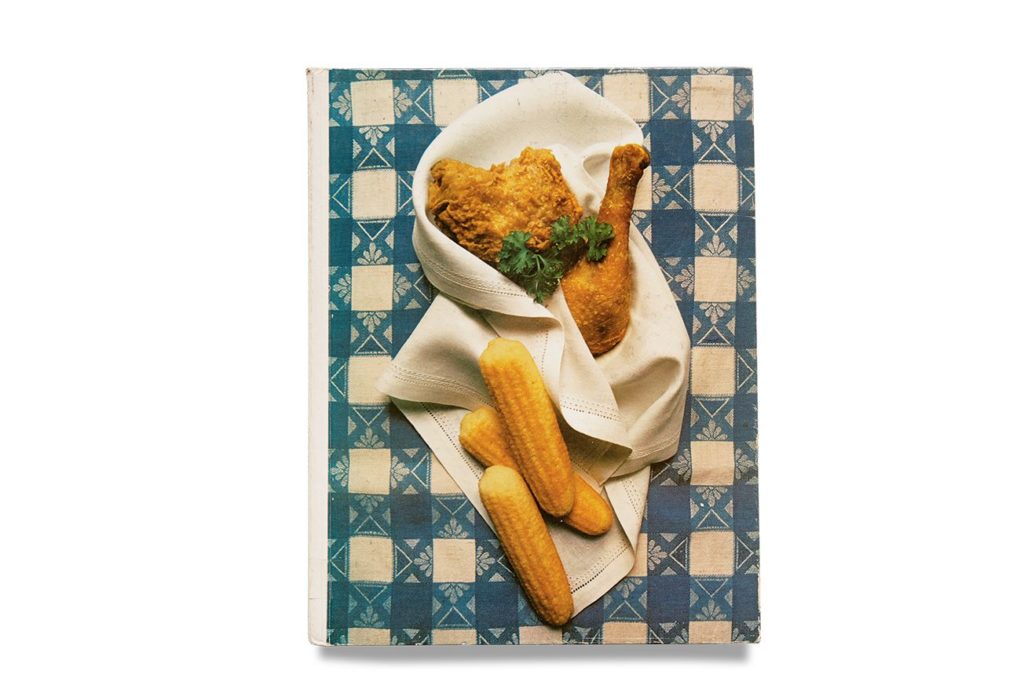 Wolff had a similar revelation with the lavish recipes in the 1958 edition of Time Picture Cookbook, the first purchase in her large collection of cookbooks. “They’re pure fantasy in rich technicolor,” she comments. “From there, I gathered more cookbooks of a similar ilk—those that had clearly paid as much attention to the staging and photographing of the food as to the recipes.” 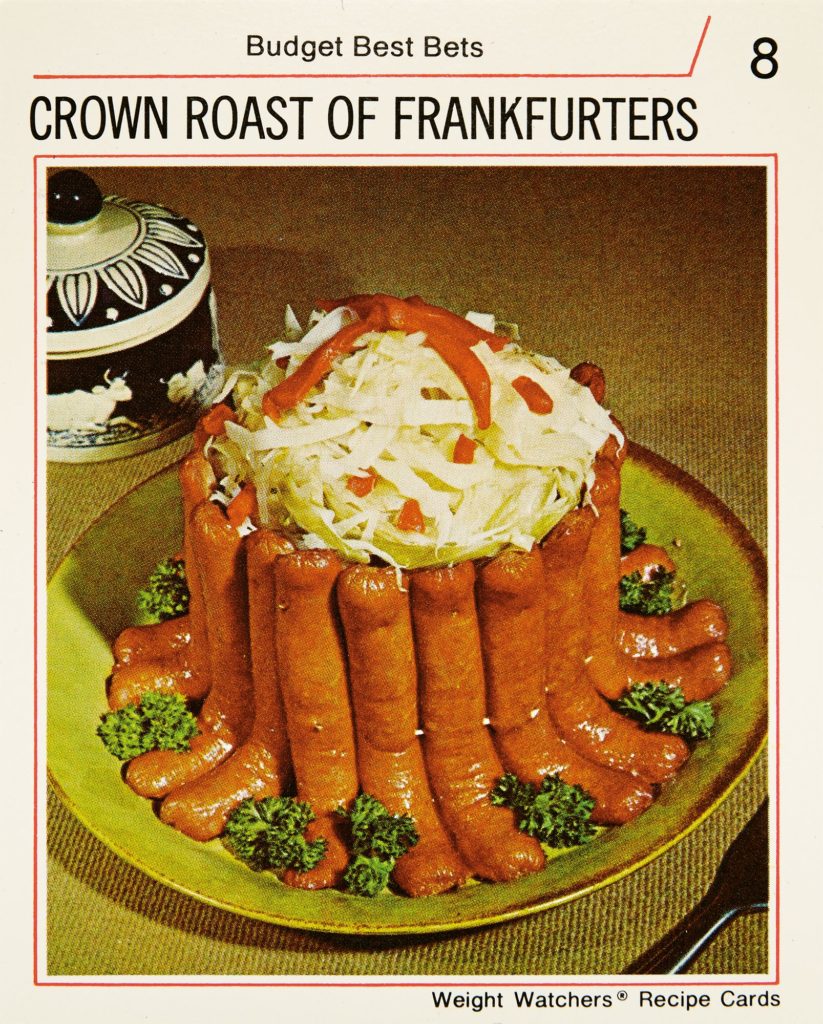 As an homage to the starting point of the Feast for the Eyes project, the walls of one room of the exhibition are decked with cookbooks from different periods: a reminder of photography’s evolving relationship with food. 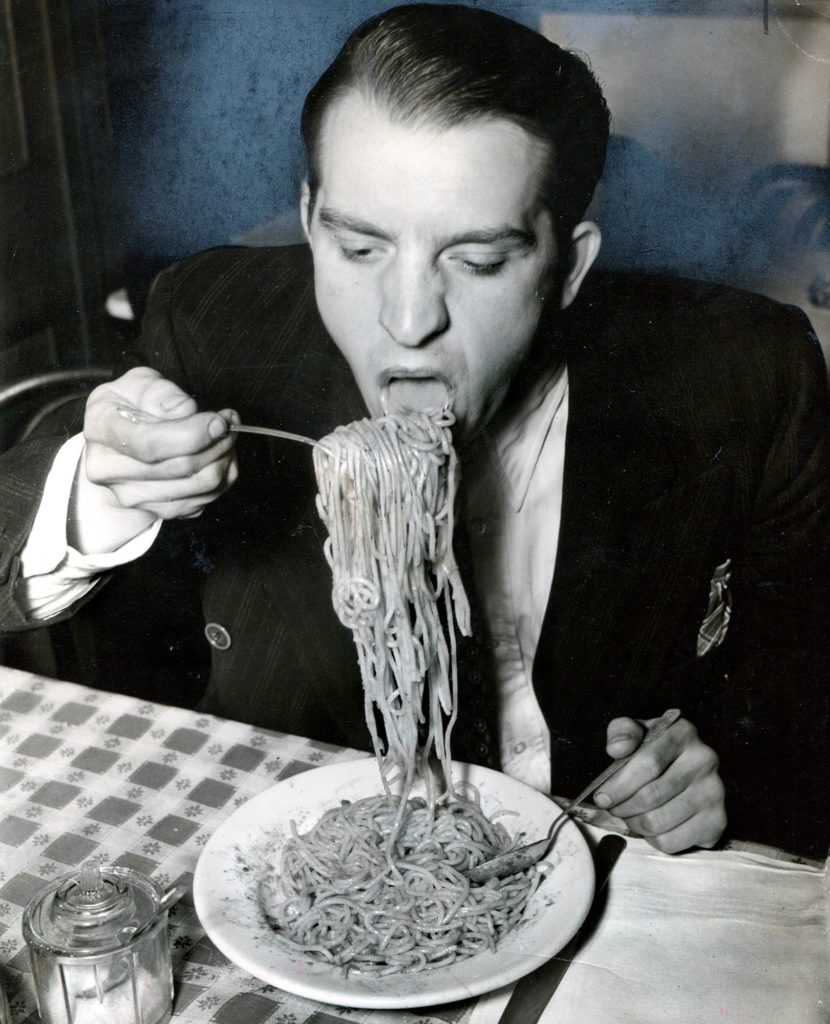 Philip J. Stazzone is on WPA and Enjoys His Favourite Food as He’s Heard That the Army Doesn’t Go in Very Strong for Serving Spaghetti, 1940
© Weegee/International Center of Photography, Courtesy of Ira and Suzanna Richer

In a world of image-sharing and social media, what role does that ‘photography-food’ relationship play now? For one, the line between the language of advertising and vernacular photography has worn thin. “With the rise of sharing food on social media, more people are concerned with how their food looks, styling their salad like a professional—not necessarily for those who will consume it, but for those consuming the pictures of it,” explains Wolff. 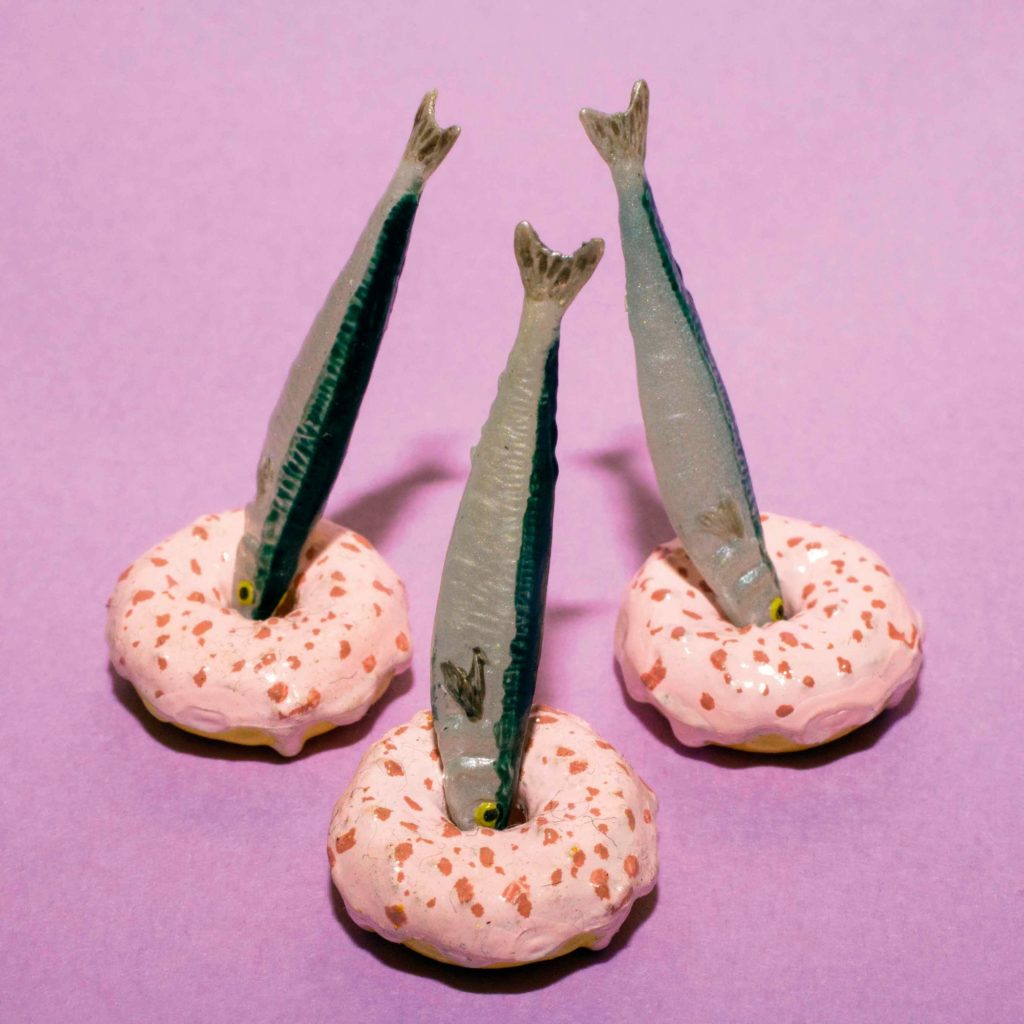 Bright adds that photographing food has become an act of importance in itself. “Social media has changed our relationship drastically. Food is now often made to be photographed,” she says. “We photograph our food for many reasons. To show how good or bad we are baking, to get affirmation or be aspirational. It shows people who we are, and who we would like to be.”

An American professor and inventor, Harold Eugene "Doc" Edgerton is credited with transforming motion photography through his experiments with the stroboscope. The exhibition curators sifted through many amazing photographs that feature "food" before making their final selections. Photo © Susan Bright and Denise Wolff

This entry was posted in Photography and tagged love, photography, food on March 7, 2019 by Gaz from Cameraworld London Branch. ← Previous Post Next Post →