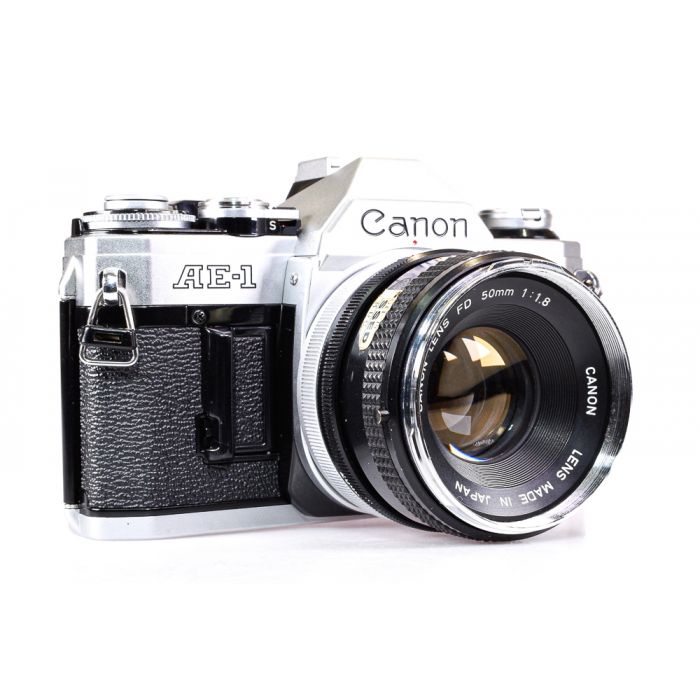 The Canon AE-1 is a 35 mm single-lens reflex (SLR) film camera for use with interchangeable lenses. It was manufactured by Canon Camera K. K. (today Canon Incorporated) in Japan from April 1976 to 1984. It uses an electronically controlled, electromagnet horizontal cloth focal plane shutter, with a speed range of 2 to 1/1000 second plus Bulb and flash X-sync of 1/60th second. The camera body is 87 mm tall, 141 mm wide, and 48 mm deep; it weighs 590 g. The AE-1 is a historically significant SLR, both because it was the first microprocessor-equipped SLR and because of its sales. Backed by a major advertising campaign, the AE-1 sold over one million units, which made it an unprecedented success in the SLR market.

The AE-1 has a Canon FD breech-lock lens mount and accepts any FD or New FD (FDn) lens. It is not compatible with Canon's later Canon EF lens mount, though adapters made by independent manufacturers can be found. The camera will also accept Canon's earlier FL-mount lenses through the use of stop-down metering. Original FD lenses, introduced in 1971, did not rotate in the mounting process; instead, a locking ring at the base was turned to attach the lens. This was often criticized as being slower than the bayonet mounts of competing cameras.[1]:201 The counter argument, though, was that as the lens/body mating surfaces did not rotate, there was no wear that could affect the critical distance from lens to film plane.

In 1979, Canon introduced the New FD series of lenses that rotate the whole outer lens barrel to lock. The inner lens barrel remained stationary, and thus the signal levers and pins still did not rotate. During the late 1970s, there were over 50 Canon FD lenses available for purchase. They ranged from a Fisheye FD 15 mm f/2.8 SSC to a FD 800 mm f/5.6 SSC, plus special purpose lenses such as a 7.5mm circular fisheye and a 35 mm tilt and shift lens.