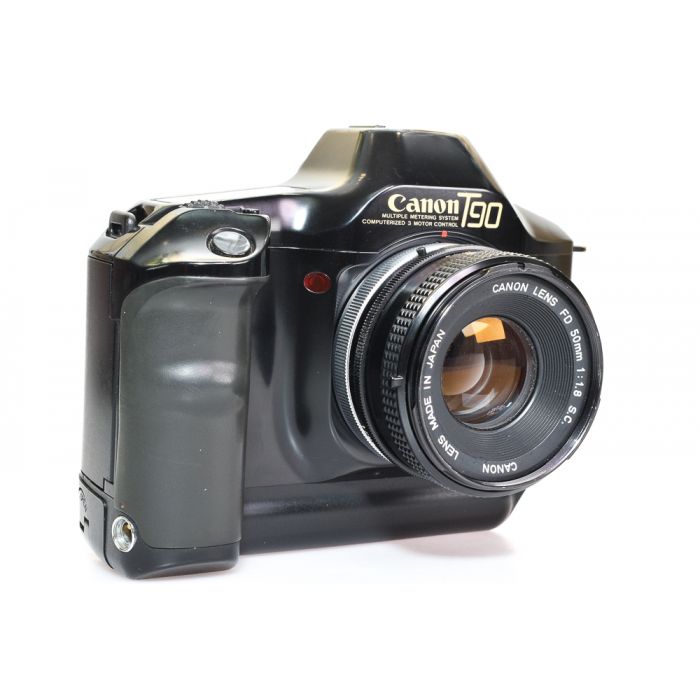 Although it was overtaken by the autofocus revolution and Canon's new, incompatible EOS (Electro-Optical System) after only a year in production, the T90 pioneered many concepts seen in high-end Canon cameras up to the present day, particularly the user interface, industrial design, and the high level of automation.

Due to its ruggedness, the T90 was nicknamed "the tank" by Japanese photojournalists. Many have still rated it highly even 20+ years after its introduction.

Previous Canon cameras had been wholly in-house design projects. For the T90, Canon brought in German industrial designer Luigi Colani in a collaboration with Canon's own designers. The final design was composed of Colani's ideas by Kunihisa Ito of ODS Co. Ltd., incorporating Colani's distinctive "bio-form" curvaceous shapes. Canon considered Colani's contribution important enough to present him with the first production T90 body, engraved with his name. Computer-aided design techniques were introduced to Canon for the T90, as well as the use of computer controlled (CNC) milling machines to make the moulding dies for the shell.

Much work went into human factors engineering to create an ergonomic user interface for the camera. The form of previous cameras was largely dictated by the required locations of mechanical controls on the body, such as the film advance lever, rewind crank, shutter speed dial, shutter release, etc. On the T90, the film transport control is no longer required, while the others are no longer mechanically linked. This gave the designers more freedom to shape the camera to make it easier to control and hold, and to place controls in a way that suited the user rather than a mechanical design.

The T90 includes an integral motor driven film advance, focal plane shutter, mirror and aperture cocking and rewind functions. Canon broke new ground with the powered features of the camera. Previously, cameras used one powerful electric motor geared to all functions. Instead, the T90 has three coreless micromotors within the body, close to the functions they drive, for maximum mechanical advantage. One is used to wind the film, achieving a rate of 4.5 frames per second. A second prepares the shutter, mirror etc. for the next shot. A third motor powers the rewind function. All of this is driven by four AA batteries in the base of the camera.

For the T90, Canon developed their most sophisticated light-metering system yet. Although it introduced no novel metering techniques, it assembled the majority of the metering techniques then developed into one easy-to-use system. First, it took the metering options from the New F-1—centre-weighted average metering, partial area metering, and spot metering—and makes them available with a press of a button and a turn of the command dial. The New F-1 requires a focusing screen change to switch metering patterns. On the T90, partial area metering uses the centre 13% of the picture area, while spot metering uses the centre 2.7%.

Eight exposure modes are available. Program AE (Auto-Exposure) mode puts exposure control completely in the hands of the camera. Variable Shift Program AE allows the photographer to bias the camera towards narrow aperture with three Wide Angle settings, or fast shutter speed with three Telephoto settings as well as the standard mode. For more manual control, Aperture Priority AE and Shutter-Speed Priority AE allow the photographer to set one exposure variable manually while the camera chooses the other.

In either of the latter two modes, a Safety Shift feature allows the camera to adjust the "fixed" parameter if it can not obtain a correct exposure otherwise. For example, in Aperture Priority mode, if the photographer has the aperture fixed wide open to photograph a very bright scene, the correct shutter speed to expose correctly at that aperture might be faster than the camera is capable of. Safety Shift lets the camera reduce the aperture until it can achieve a correct exposure at maximum shutter speed. The Safety Shift feature can be turned on and off by pressing two buttons on the back of the camera near the base.

The T90 was the first Canon camera to support through-the-lens (TTL) flash metering. This measures the actual light levels reaching the film by measuring reflected light off the film (OTF), shutting down the flash unit once the film is sufficiently exposed. The measurement is calculated using the average reflectivity of colour negative film. This system is also used on Canon's new EOS system, making the T90 the only non-EOS Canon body compatible with TTL Canon flashes. The T90's X-sync speed of 1/250 second was the fastest Canon had achieved and is better than most other cameras available at the time it was in production.