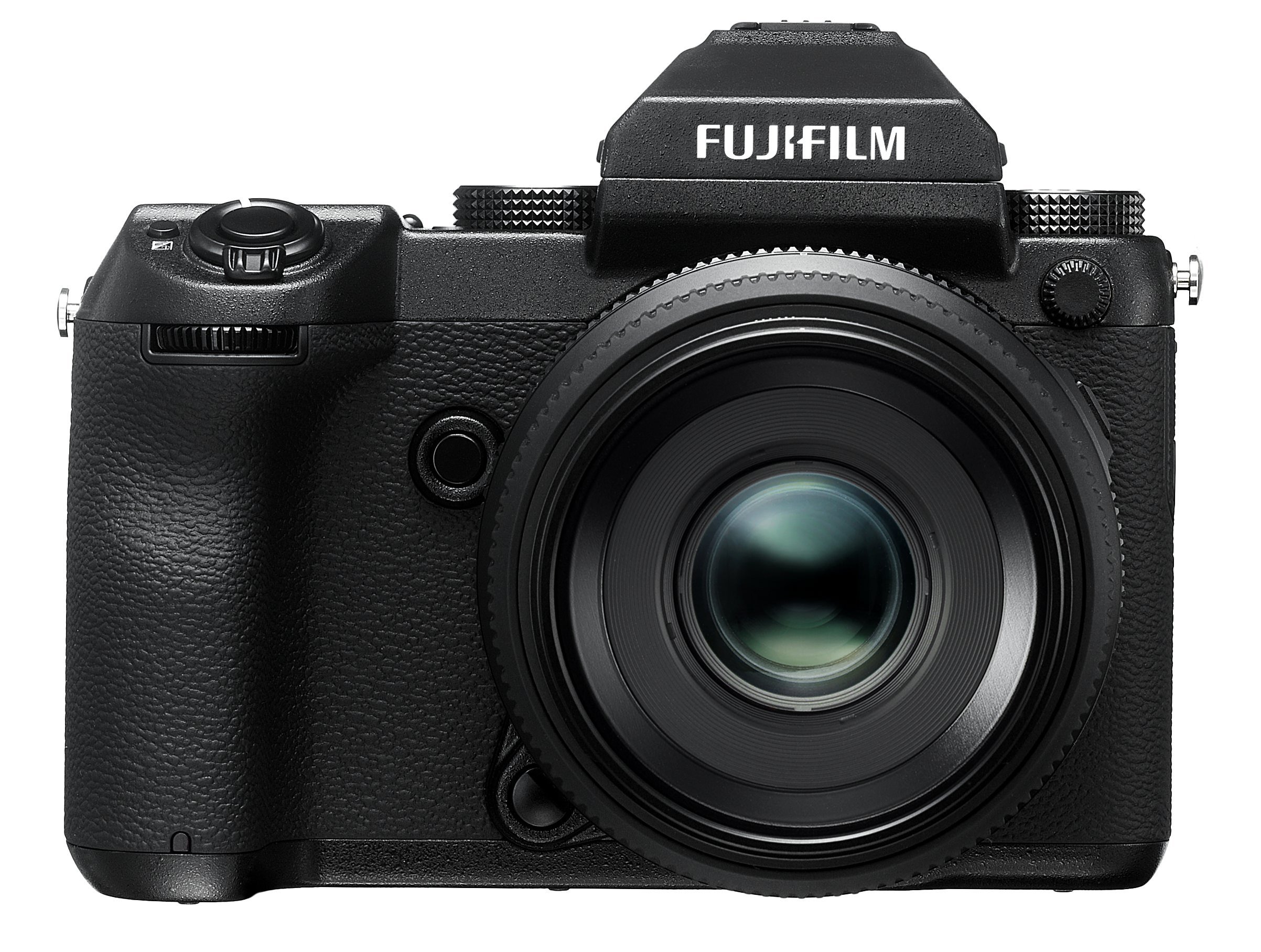 Since the introduction of the X100 in 2011, Fujifilm has strived to achieve the world’s highest level of image quality with its X Series of cameras. The latest and the most advanced addition is the new medium-format mirrorless camera “GFX.”

It uses the new large-diameter “G Mount” and incorporates a large 43.8x32.9mm CMOS sensor in the first-ever such move by Fujifilm. Boasting the effective pixel count of 51.4 million, the camera delivers superior sharpness and image quality that will satisfy professional photographers shooting commercial, fashion or fine-art landscapes.

It uses the “X Processor Pro” imaging processor, which provides Fujifilm’s outstanding color and tone reproduction, delivering unparalleled photographic expression that can only be offered thanks to Fujifilm’s unique expertise in medium-format cameras. 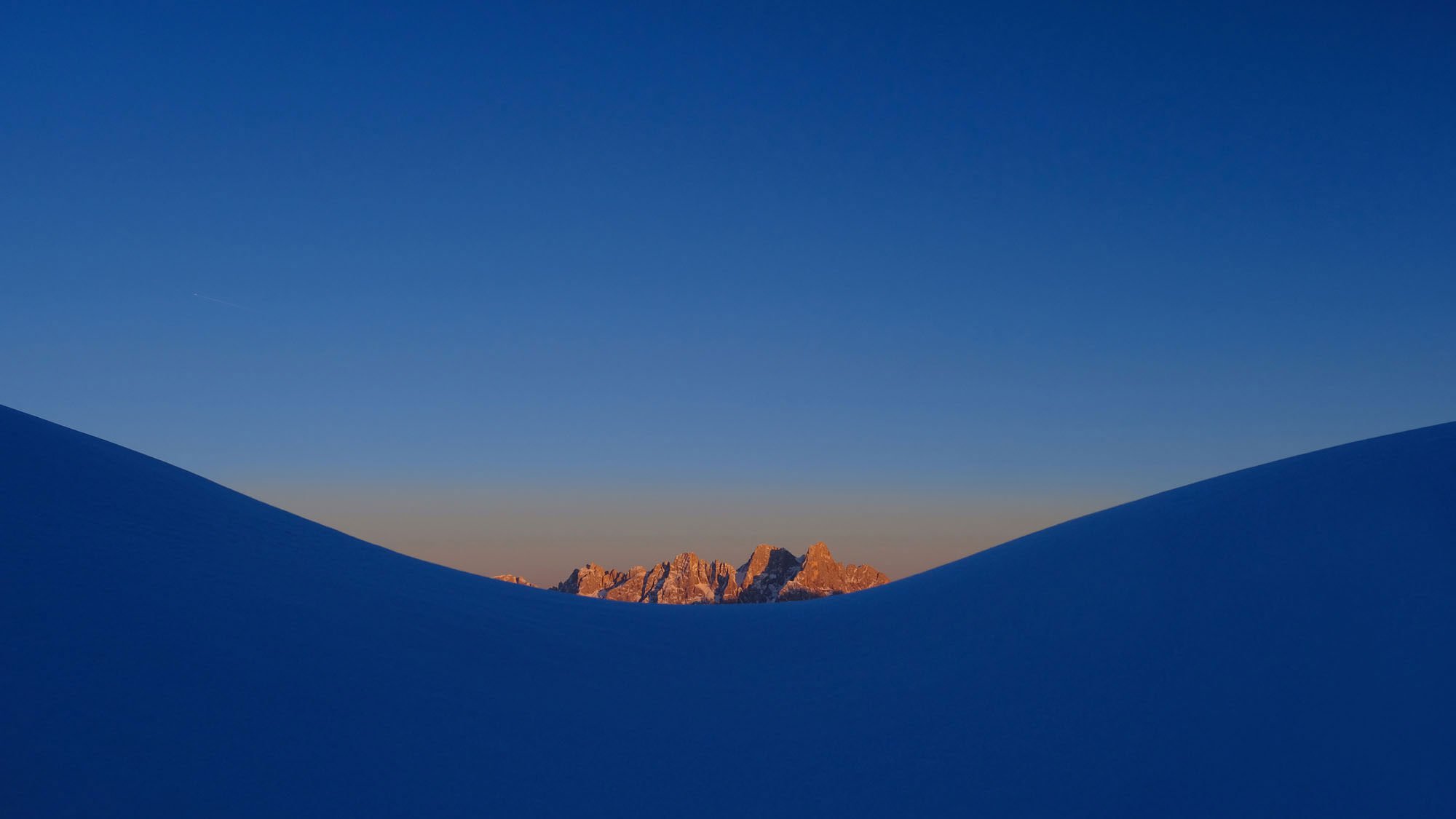 Lets break it down a little...

The most basic description of this camera is that it is "a mirrorless camera with a sensor that is much larger than most other cameras on the market."

The GFX 50s and the GFX 50r features a 43.8x32.9 CMOS Sensor.  It produces a beautiful 51.4 Million Pixels Effective Resolution image which offers superior tones and sharpness that will impress any level of photographer or profession. 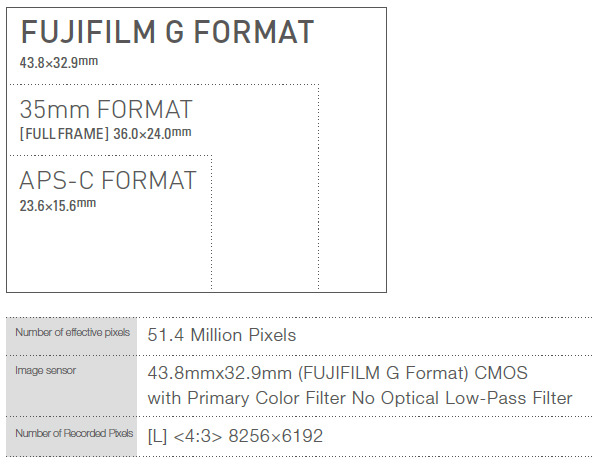 As this image shows, the Fujifilm G Sensor is noticeably bigger when compared to a Full Frame Camera, such as a Nikon D850 or Sony A7R III, and almost twice the size of an APS-C Sensor as those found in such cameras as the Canon EOS 7D Mark II, and even Fujifilm's own X-T2.

Interestingly, Panasonic and Olympus mirrorless cameras use a FourThirds sensor which is smaller again.  These sensors are roughly half the size of a Full Frame sensor.

Both the shape of the light-gathering micro-lenses and the processing from the photodiodes have been optimized to achieve a high level of sharpness and broad dynamic range.

The lowest native ISO sensitivity of 100 and the 14-stop dynamic range, achieved with the 14-bit RAW data delivers high definition imaes in a variety of conditions with notably rich skin tones and intricate detail.

It is worth noting that medium format has traditionally referred to a film format in still photography.  Generally, the term applies to film and digital cameras that record images on media larger than 24 by 36 mm (full-frame) but smaller than 4 by 5 inches (which is considered to be large-format photography).

So what comes next?

Every single digital camera needs a processor and is the very heart of each camera.  The Fujifilm GFX 50s and 50r is no different in that respect.

The X-Processor Pro engine is designed for drawing out the very best from the 51.4 megapixels sensor.  Its advanced processing accelerates and optimizes the camera's perfromance in a variety of areas including stunning colour reproduction with Fujifilms unique (and very popular) Film Simulation Modes, in-camera RAW conversion to the 8-bitt TIFF format, accurate contrast AF, quick startup time and minimal shutter release time lag and shooting intervals between frames. 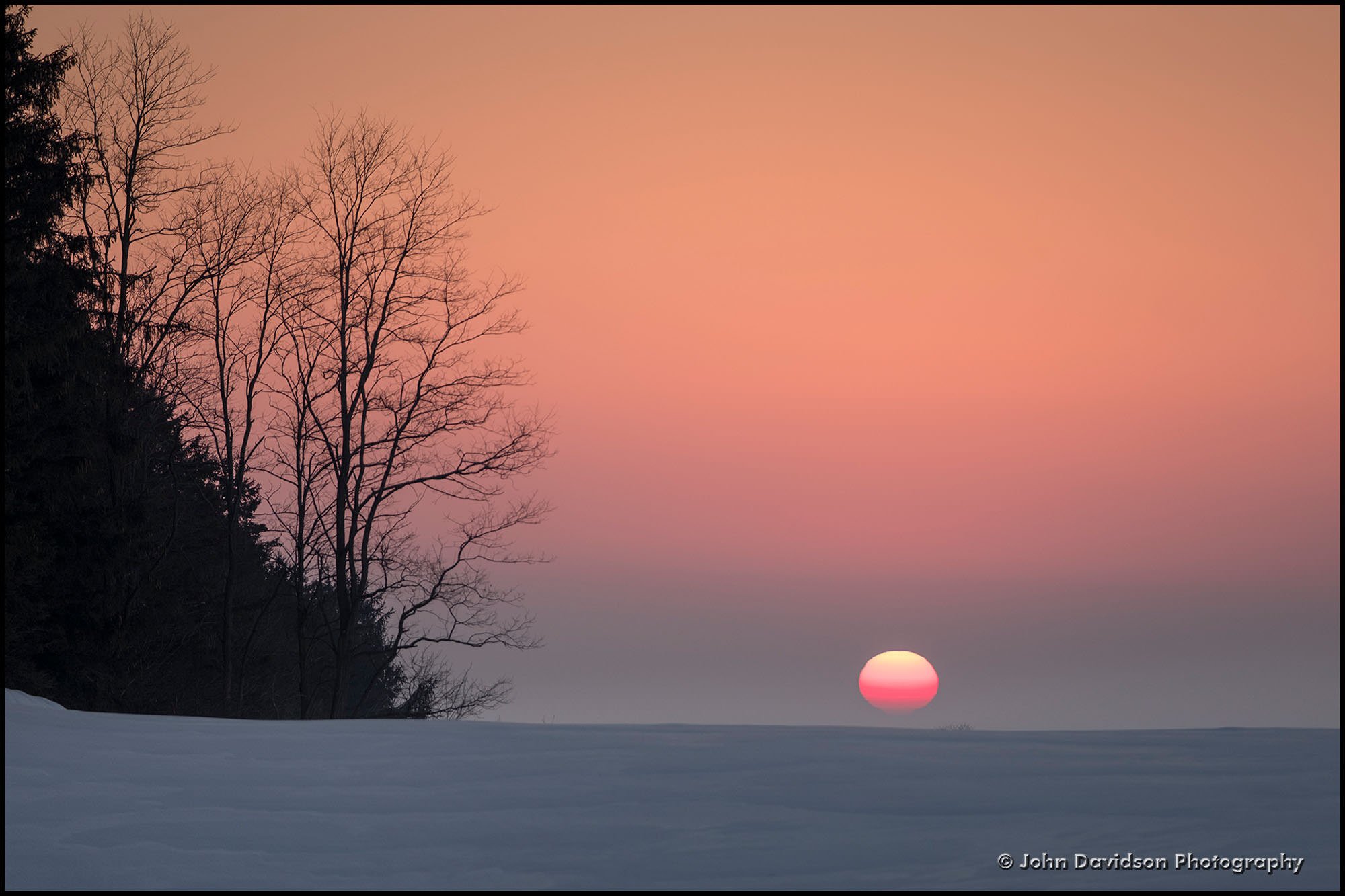 No camera, regardless of how much you spend or how good it is, will ever work without a lens. 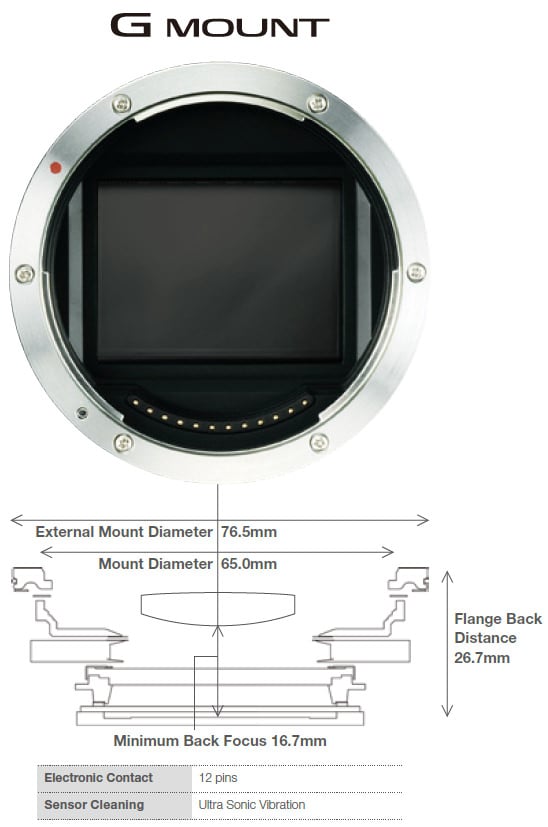 With the introduction of the Fujifilm GFX 50s and 50r, Fujifilm had to introduce a new range of lenses to meet the needs of both the sensor and the X-Processor Pro.

The G Mount has a mount disameter of 65mm, flange back distance of 26.7mm and minimum back focus distance of 16.7mm

It uses 12 electronic contact points for sending and recieveing data from the lens to/from the body, plus supports the use of GF Lenses and accessories.

The short back focus distance, made possible becuase of the Fujifilm mirrorless system structure, affords greater freedom in the lens design to contribute to the developement of fast, compact and high-performance GF lenses while preventing vignetting to deliver the perfect picture.

The current range of lenses includes:

Well, like a lot of digital cameras on the market, the Fujifilm GFX 50s and 50r can offer to shoot images and saves images in a variety of formats and quality, Including two sizes and three compression levels of JPEGs, as well as compressed/uncompressed RAW.

Even when you are shooting only in RAW, the camera records 12-megapixel thumbnails at the same time.

Its in-camera RAW-Conversion function also enables RAW files processeing with the ability to save them as 8-bit TIFFs. 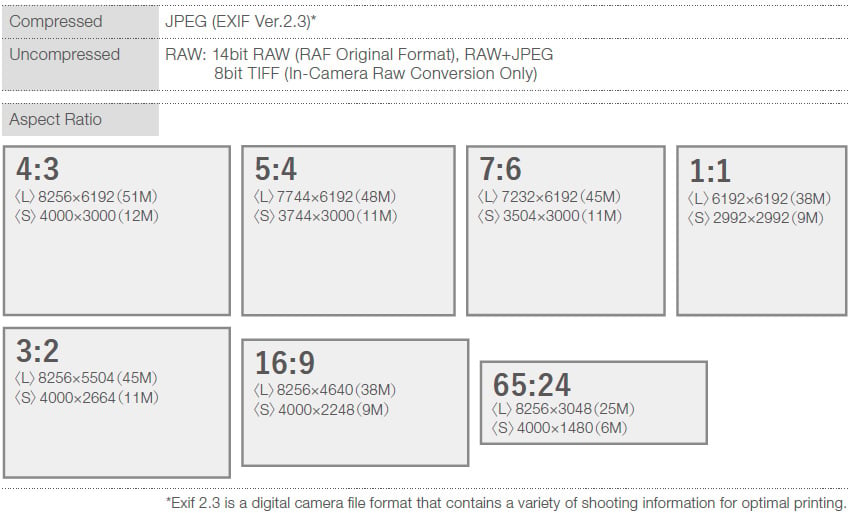 ISO Sensitivity: ISO is a way of defining the speed of film.  Yes, we get that this is digital, but the effects are very, very similar.  During film days, it was referred to as ASA adn DIN, but these were combined in 1974 to ISO.

For the GFX 50s and 50r, the standard sensitivity range is ISO 100-12,800 which is expandable to ISO50, ISO25,600, ISO51,200 and ISO102,400 as well. RAW format is supported at all these ISO settings.  The AUTO function allows to set the standard ISO, low shutter speed limite and upper ISO limit, and configure AUTO 1-3 settings according to shooting conditions.

For well over 80 years now, Fujifilm have been synonymous with film manufacturing for 35mm as well as film-based medium format.

The FILM SIMULATION modes allow you to reproduce a variety of colours and tones as if using different photographic films. 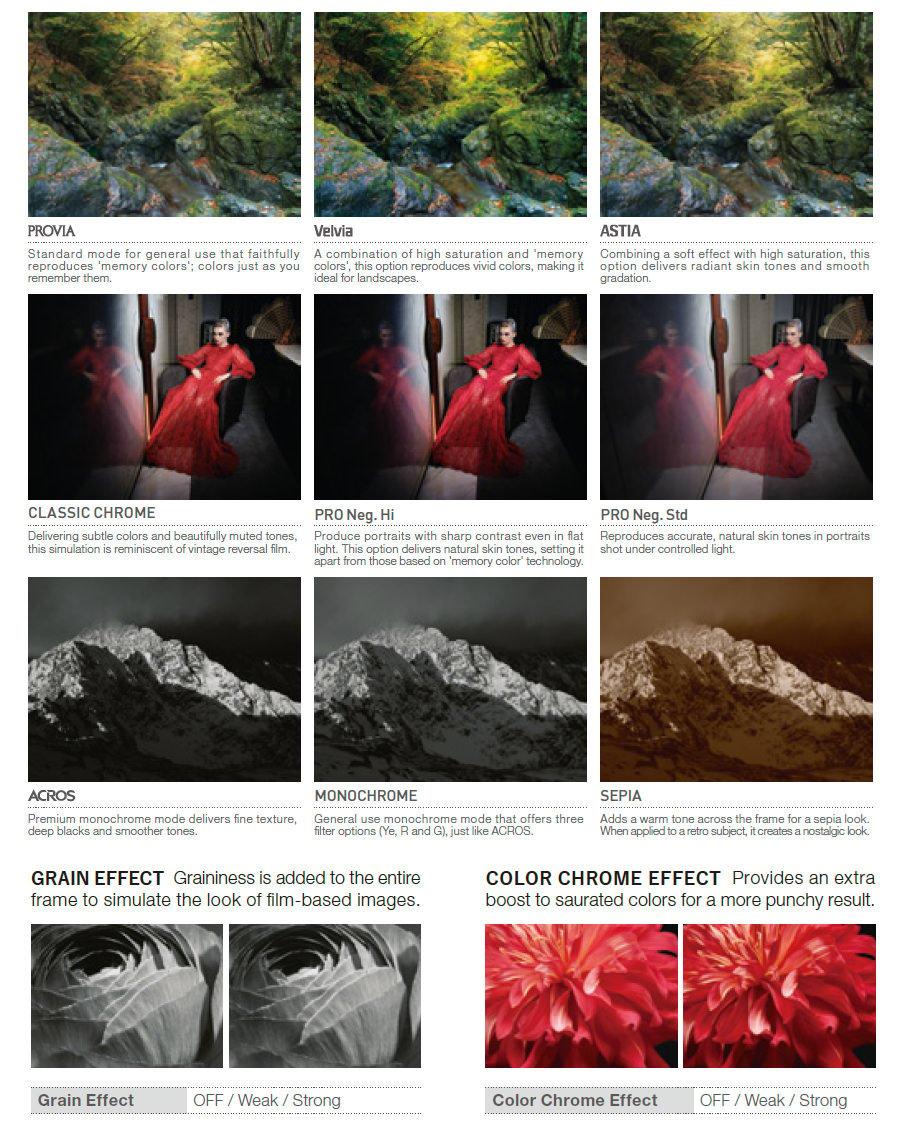 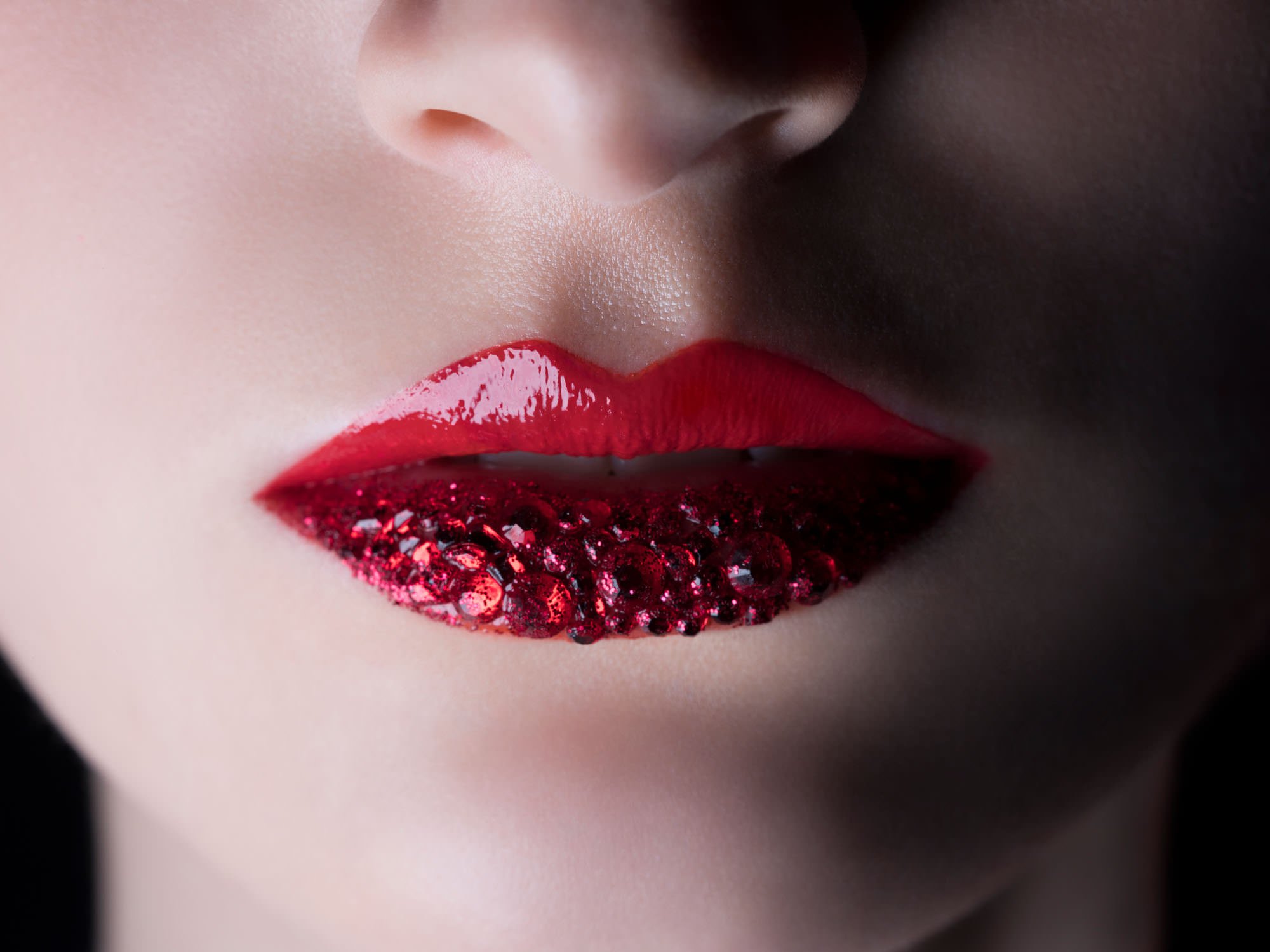