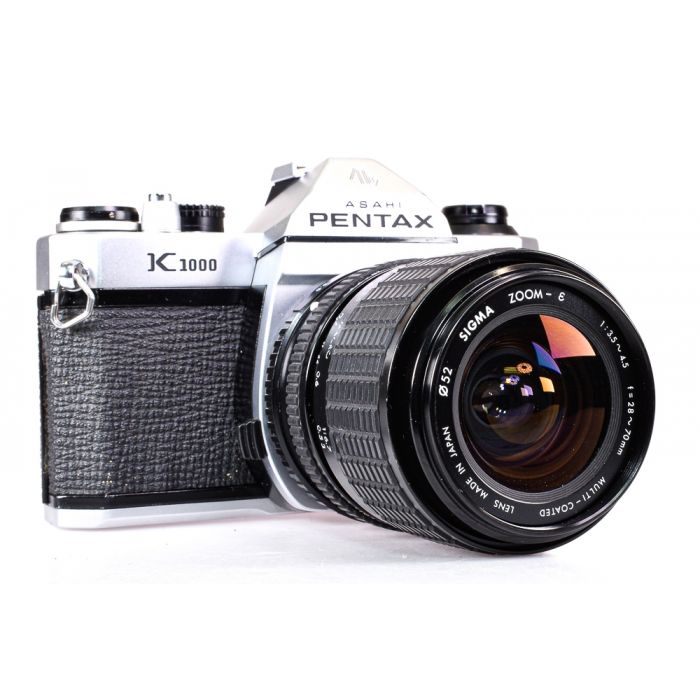 The K1000's extraordinary longevity makes it a historically significant camera. The K1000's inexpensive simplicity was a great virtue and earned it an unrivalled popularity as a basic but sturdy workhorse. The Pentax K1000 eventually sold over three million units. The K1000 is an almost-all metal, mechanically (springs, gears, levers) controlled, manual-focus SLR with manual-exposure control.

It is completely operable without batteries. Batteries are only required (one A76 or S76, or LR44 or SR44) for the light metering information in the viewfinder. This consists of a centre-the-needle exposure control system using a galvanometer needle pointer moving between vertically arranged +/– over/underexposure markers to indicate the readings of the built-in full-scene averaging, cadmium sulfide (CdS)battery light meter versus the actual camera settings. The meter does not have an on/off switch and the lens cap must be attached to the lens to prevent draining the K1000's battery when it is not in use.

Conventional for the time, there is a film advance lever on the right and a rewind crank on the left on the top plate. The K1000 has a Pentax K bayonet mount, a type introduced with the K Series.

Originally it was usually sold with the budget SMC Pentax 50 mm f/2 lens, and it accepts any other manual focus lens with the K mount. This includes the SMC Pentax, SMC Pentax-M and SMC Pentax-A types. In addition, almost all lenses with the Pentax K-AF and K-AF2 autofocus lens mounts (introduced 1987 and 1991, respectively) also work in manual focus mode.

The exceptions are Pentax's newest SMC-Pentax FA J (1997) and SMC-Pentax DA (2004) types which lack an aperture control ring, and K mount lenses designed for APS-C cameras; these can be mounted but with restricted functionality. There are also adaptors to allow older screw mount lenses to be used on K mount cameras (with limitations). In all, there are vast numbers of Pentax and third party lenses that can be used with the K1000 and other K mount camera bodies.